Better machine accuracy ensures higher quality in manufactured parts and products. Precision positioning is therefore a critical requirement when selecting or developing a servo system. Servotronix has developed a number of methods for overcoming positional errors and improving machine performance, particularly as they apply to linear motion systems. Accuracy of the system while in operation can be affected by a number of conditions or factors, resulting in unacceptable performance. A few examples:

Encoder: Mechanical, electronic or optical imperfections within the encoder, introduced during the manufacturing of the device itself, can result in positioning errors. Environmental conditions, electric noise, and other external factors can also impair the quality of encoder signal.

Load: Positioning inaccuracy may be caused by flexing components in the mechanical system.

Orthogonality: For XY tables to achieve precise positioning, the X‑axis and Y-axis lines of travel must be exactly at right angles (orthogonal) to each other. If the two lines of travel are not orthogonal, Y-axis travel creates a position error in the X direction, and vice versa.

Backlash:Backlash is a function of the gap between mating gear teeth in the transmission. Normal backlash allows gears to mesh without jamming together, and provides space for lubrication. Excessive backlash, which may occur when a leadscrew nut frequently reverses direction, for example, will result in positioning errors.

Hysteresis: Hysteresis errors are differences between the actual and commanded position caused by inconsistent system responses to increasing and decreasing input signals.

To apply the most effective method for correcting positioning errors, it should first be determined whether or not the errors are repeatable. When the deviation from the target position is measurable and reproducible, certain functions or algorithms can be used in the servo drive to achieve and maintain the necessary accuracy. When positioning errors are random or erratic, correction may be achieved best by means of an external device.

Repeatability is the ability of the motion system to return to a specific location again and again. Precision refers to the measured range when the system returns to a specific position. Accuracy indicates how close the system is to a certain measurement or true position.

In general, it is possible to determine repeatability of positioning errors through a process of movement and measurement of a defined position. An external, precision feedback device, such as a laser interferometer, can be used as a tool for this process.

Let’s say the motion controller instructs a linear stage to move to a particular position. Once motion is completed, the external device measures the actual location of the stage. The command-motion-measurement cycle is executed repeatedly, until it can be determined whether positioning errors occur, and if so, whether they are consistently equal. Positioning errors may vary over the course of travel, so it is necessary to repeat the testing process for a range of points in the linear motion system.

When errors are repeatable, their occurrence is predictable and the servo drive firmware can provide the necessary correction, and achieve and maintain accuracy, without requiring a secondary or external feedback device. 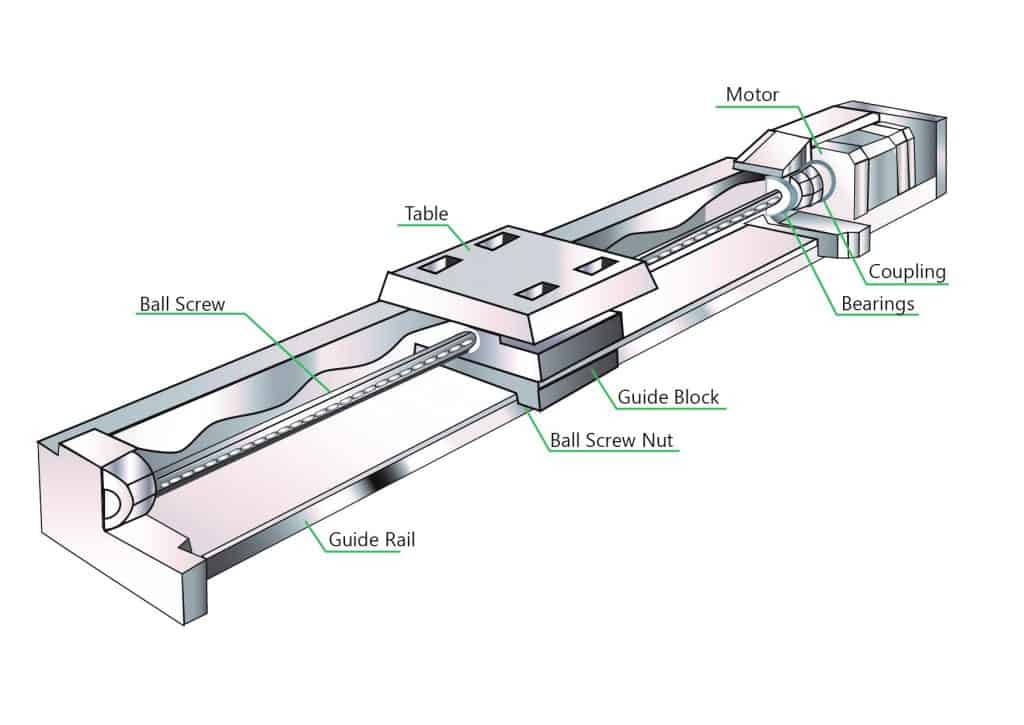 To consider whether harmonic compensation should be applied to the servo control loop, the disturbances need to have a fixed pattern over motor cycles. This indicates that harmonic errors are present in the system. Motor cogging torque, for example, is caused by a motor’s mechanical structure. Cogging torque typically occurs in iron core linear motors, and can therefore be corrected through harmonic compensation.

The Servotronix CDHD2 servo drive includes a harmonic compensation algorithm that provides correction to torque and feedback disturbances, which may be caused by a mechanical imperfection in the motor and/or a flaw in the feedback. The harmonic correction algorithm can handle disturbances that have a repeatable pattern in one motor pitch in linear motors, or one motor mechanical revolution in rotary motors. 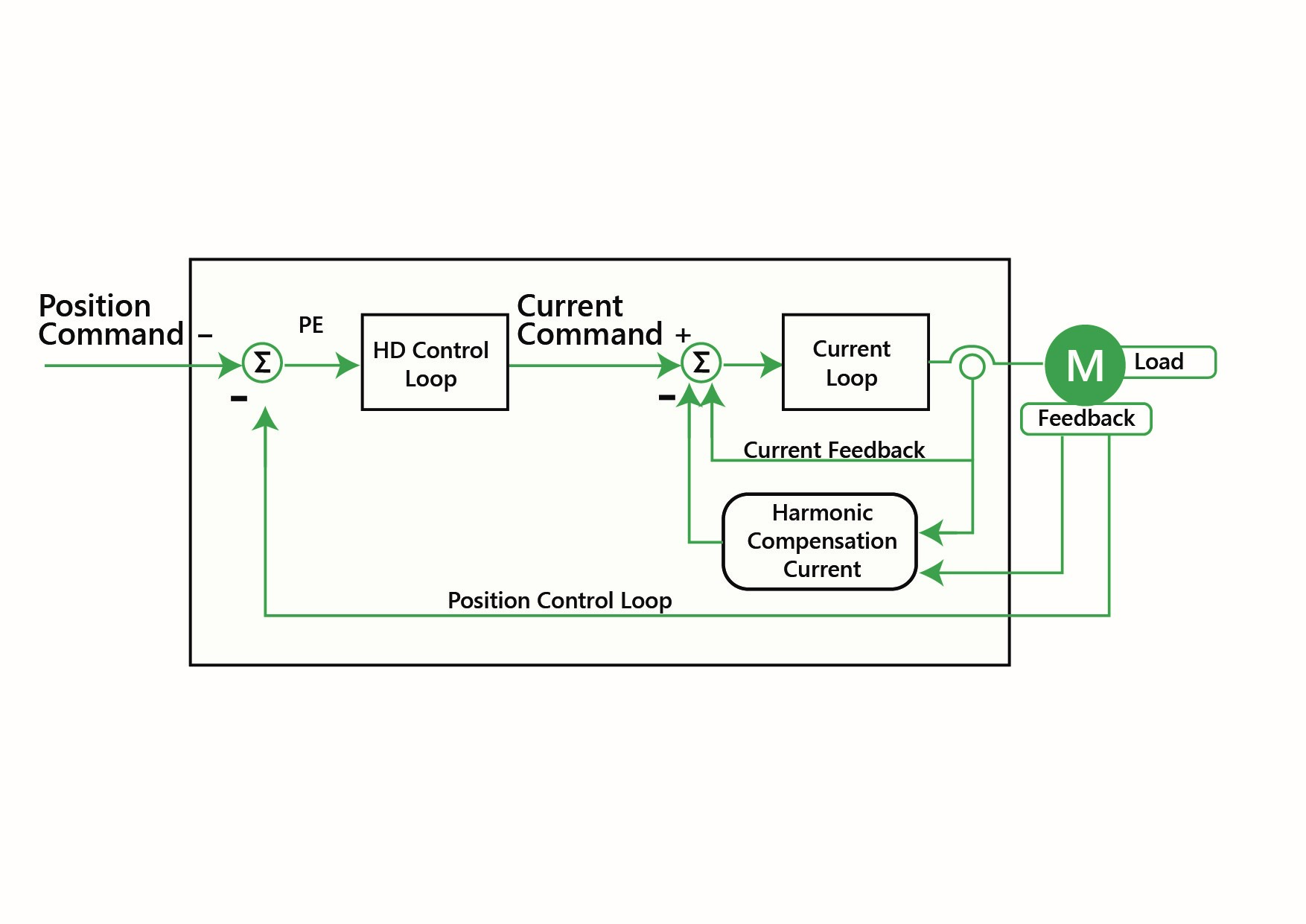 Some repeatable positioning errors cannot be corrected by an analytic expression. It may be that the motion system loses accuracy and needs compensation at only a few points along the line of travel. For errors such as these, an external measurement device can be used to generate an error mapping table, which can then be used by the drive to compensate for errors at specific points.

For example, the position of the load on a linear axis can be measured by means of a laser interferometer. For the sake of simplicity, let’s assume the axis travel distance is one meter. The drive software sends an instruction to move the motor along in intervals of 100 mm, so that the motor moves through a range of 10 positions. As the motor moves the load, the interferometer measures the distance traveled by the load, which is compared at each point to the motor encoder position. The difference in the two values is the position error.

Once error mapping is generated, it is stored in the drive’s non-volatile memory, and an error compensation function can be activated in the drive.

An algorithm interpolates between points. In this example, to move the stage to a point 275 millimeters from the origin, the controller takes the nearest two data points from the lookup table (200 and 300 millimeters) and calculates the correction value for the point at 275 millimeters.

The advantage of this method of position error correction, which can be performed by CDHD2 servo drives, is that the drive can retrieve a correction value in realtime, based on the actual position, and apply the correction on the fly. Once the correction is implemented, the error becomes negligible, and an additional position feedback device is not needed. 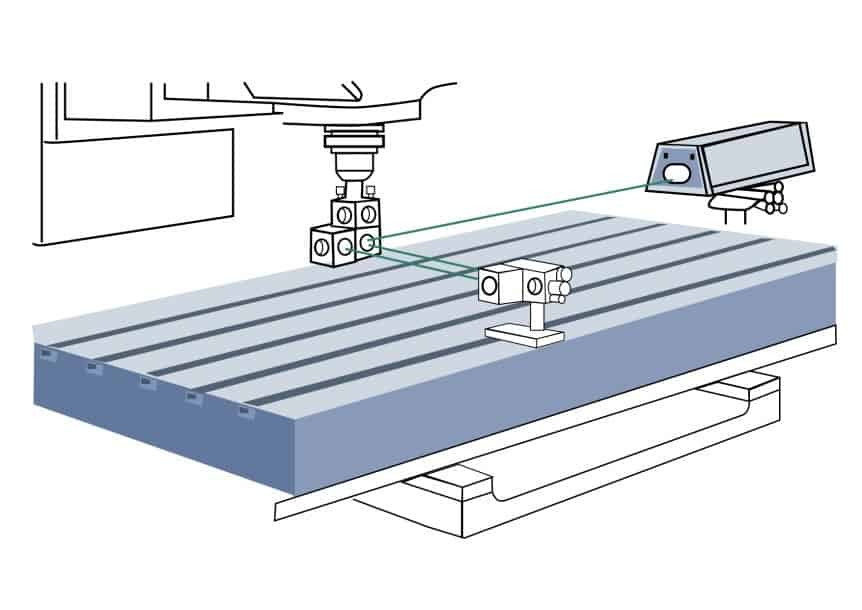 The dual-loop configuration requires scaling of the secondary feedback relative to the motor feedback, along with a particular tuning method, as shown in the diagram.

The Servotronix dual-feedback control loop has been implemented in a series of GE Healthcare PET/CT scanners for clinical imaging, in which the patient table cradle axis is driven mechanically by a ballscrew.

To counteract the effects of backlash in the GE scanner system, two encoders are connected to the axis. The position feedback encoder is mounted on the motor, while a secondary feedback encoder monitors the load. The dual-loop control solution increased the smoothness of operation and the positioning accuracy of the imaging system. It also provides a safety function in detecting load detachment or collision.

Every linear motion machine application has unique challenges and solutions. The versatility of CDHD2 drives allows customers to implement an error correction method – such as dual loop control, harmonic compensation, or error mapping – that produces the highest levels of accuracy and machine performance.

The challenges of developing AGV Robots Engineers developing autonomous guided vehicle/autonomous mobile robot (AGV/AMR) applications face many challenges, not the least of which is specifying